Why race is such a big political issue 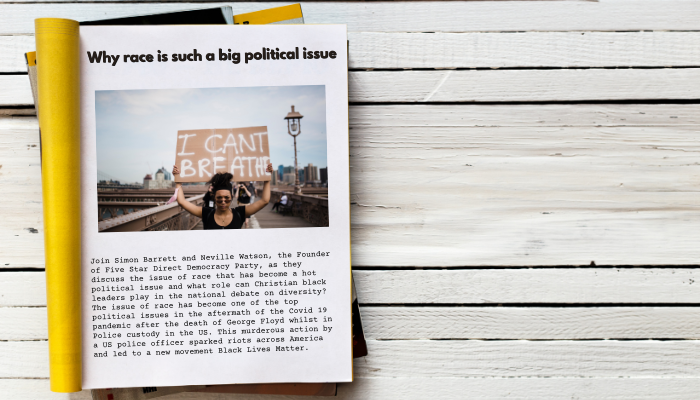 On Politcs Today on Thursday, Join Simon Barrett and Neville Watson, the Founder of Five Star Direct Democracy Party, as they discuss the issue of race that has become a hot political issue.  They also talk about what role can Christian black leaders play in the national debate on diversity?

The issue of race has become one of the top political issues in the aftermath of the Covid 19 pandemic after the death of George Floyd whilst in Police custody in the US. This murderous action by a US police officer sparked riots across America and led to a new movement Black Lives Matter.

The Back Lives Matter has put race, ethnic diversity, and inclusion high up the political agenda and has sparked a nation debate about how the lives of ethnic minorities can be improved.

What is troubling about Black Lives Matter is not their campaign to improve the lives of many Black people who feel disenfranchised by society but the hidden agenda of this well financed movement. It advocates violence and promotes extreme Marxist ideology that seeks to over through our political system and replace it with communist political and economic government.

In this International debate it is important to listen to Christian black leaders who are actively engaged in Politics and address the needs and concerns of their community by give a biblical perspective.

Simon's guest Neville Watson was a professional football player in the late 1970s and early 1980’s where he received racial abuse at football grounds and no support from teammates that had a detrimental impact upon his career.

They will be asking how does have a Christian faith help to confront racial prejudices in our society.

What role can Christian black leaders play to inspire and lead their communities.

The issue of race, ethnic diversity and inclusion has become a hot political issue in the aftermath of the horrific murder of George Floyd by a police officer in his custody that sparked race riots across America.

We saw after the race riots the raise of Black Lives Matter BLM movement but who is behind this movement and what is their agenda?

Black Lives Matter has been promoted by professional sport and the bending of the knee before every premiership football game and does this help to stamp out racism?

BLM is promoting an agenda that is not in the interests of ordinary black people who feel disenfranchised by society in that it promotes political violence and extreme Marxist ideology.

The Conservative party has launched the Diversity Project that seeks to foster greater diversity and inclusion at grass roots level within the Tory party.

They will be asking how as Christians can we confront and address racial prejudices in our society?

What role can we all play in standing up to racism?

Join Simon and his special guest Thursday at 8.30pm repeated at 2pm.  Always a powerful programme.