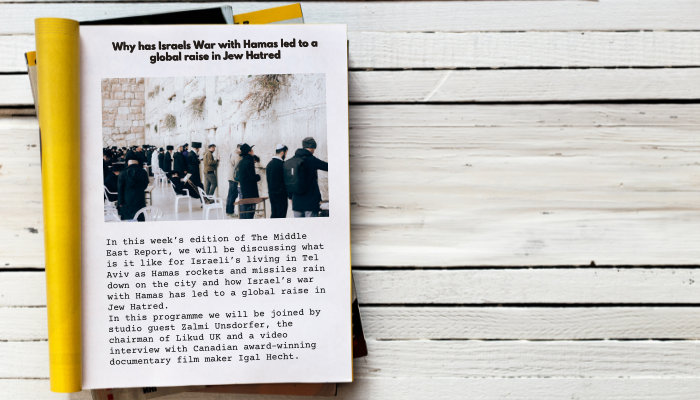 In this week’s edition of The Middle East Report, we will be discussing what is it like for Israeli’s living in Tel Aviv as Hamas rockets and missiles rain down on the city and how Israel’s war with Hamas has led to a global raise in Jew Hatred.

In this programme we will be joined by studio guest Zalmi Unsdorfer, the chairman of Likud UK and a video interview with Canadian award-winning documentary film maker Igal Hecht.

We discuss Israel’s military response to Hamas firing over 4000 rockets and missiles into Israel and how the IDF destroyed over 60 miles of the terror organisation’s underground terror tunnel networks. We discuss how this conflict in the Middle East has spread Jew Hatred around the world. In London we have witnessed nothing but Jew hatred at the pro-Palestinians rallies that have taken place.

Please watch this week’s The Middle East Report on Friday at 9pm as we unpack the eleven-day war Israel had with the terror organisation Hamas and how this has led to an unprecedented rise in anti-Semitism globally.

Tonight at 9pm on revelation tv.