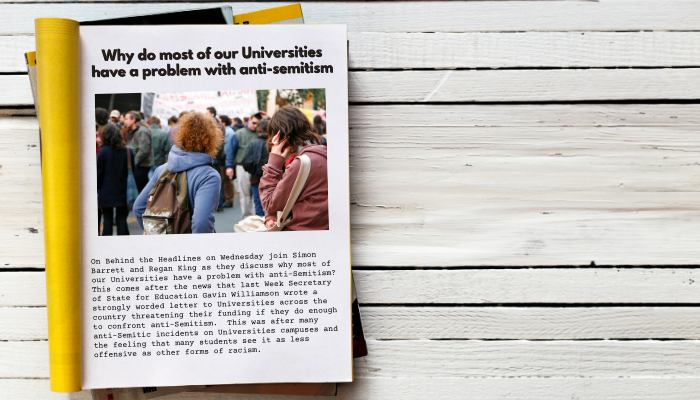 On Behind the Headlines on Wednesday join Simon Barrett and Regan King as they discuss why most of our Universities have a problem with anti-Semitism?

This comes after the news that last Week Secretary of State for Education Gavin Williamson wrote a strongly worded letter to Universities across the country threatening their funding if they do enough to confront anti-Semitism.  This was after many anti-Semitic incidents on Universities campuses and the feeling that many students see it as less offensive as other forms of racism.

In the letter to the Universities last week he wrote: “It is frankly disturbing that so many are dragging their feet on the matter of anti-Semitism. The repugnant belief that anti-Semitism is somehow a less serious, or more acceptable, form of racism has taken insidious hold in some parts of British society,”

Further the Education Secretary has been shocked and disappointed that very few of our Universities have adopted the International Holocaust Remembrance Alliance IHDA definition of anti-Semitism
A troubling survey carried out by the Union of British Students found that only 29 out of 133 universities had adopted the IHDA definition of anti-Semitism that includes singling out Israel as well as derogatory comments against Jewish people.

They will be looking at the importance of them adopting this definition and what it means if they don’t.

Universities are meant to be a place of learning and the exploring of academic ideas not a breeding ground for hatred and anti-Semitism.

Join them as they look at the importance of making sure our places of learning do not hold anti-semitic views as they produce perhaps the next generation of leaders in Politics, Journalism, academia, and business etc, and if they hold anti-Semitic views this will only bring disaster upon our nation. The Bible makes clear in Genesis Chapter 12 – 1-3 that those who bless Israel will be blessed and those who curse Israel will be cursed.

Join them for this and more.

Behind the Headlines Wednesdays at 10pm repeated 2pm Friday, don't miss i.