What lies behind the political chaos in Washington DC 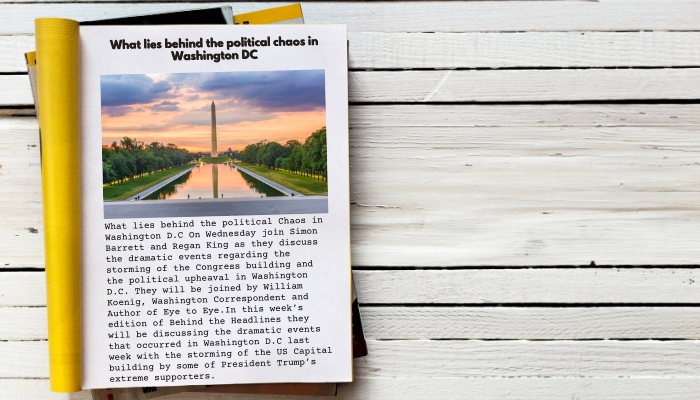 What lies behind the political Chaos in Washington D.C

On Wednesday join Simon Barrett and Regan King as they discuss the dramatic events regarding the storming of the Congress building and the political upheaval in Washington D.C. They will be joined by William Koenig, Washington Correspondent and Author of Eye to Eye.

In this week’s edition of Behind the Headlines they will be discussing the dramatic events that occurred in Washington D.C last week with the storming of the US Capital building by some of President Trump’s extreme supporters.

The storming of the US Congress building has sent shockwaves throughout the world and has even brought democracy into disrepute, as Senate and Congress men and women sheltered in the speakers chamber as extreme Trump supporters stormed the building.  Both houses of Congress and the Senate were meeting to ratify Joe Biden as the 46th President and less than two weeks before his inauguration.

There is still controversy surrounding the US Presidential Election result with mass voter fraud and direct foreign intervention that ensured that Joe Biden would win the Presidency. To make matters worse for the Republicans they have lost two Senate seats in their stronghold of Georgia meaning that the Republicans have lost the upper house and this will give Joe Biden unprecedented power over all the US political intuitions of government.

The fallout from the storming of the Congress building has resulted in the Speaker of the House, Nancy Pelosi to start a second impeachment against President Trump even though he has less than two weeks in office. President Trump favoured means of communications his twitter account has been closed with 55 Million people following him and suspension of his email account. That is a direct assault on freedom of speech and expression as tech giants take power into their own hands.

The fallout between President Trump and his Vice President Pence is very troubling as Trump was looking to Pence to cancel the election result by not endorsing Joe Biden in both Houses of Congress the ceremony of voting in Biden as President by both houses before his Inauguration.

The political drama is not ever yet as there have been discussions by prominent journalists in the know that President Trump could enact the Insurrection Act of 1807 and prevent Joe Biden from becoming President and secure his second term.

The world’s greatest democracy is in danger of losing its beacon of liberty that has shone brightly for centuries and is this a sign that our Christian freedoms are now under threat.

Join Simon and Regan for this important programme on Wednesday evening at 9pm repeated Friday at 2pm.

Behind the Headlines – what you really need to know.