What lies behind the Israeli United Arab Emirates Peace Accord 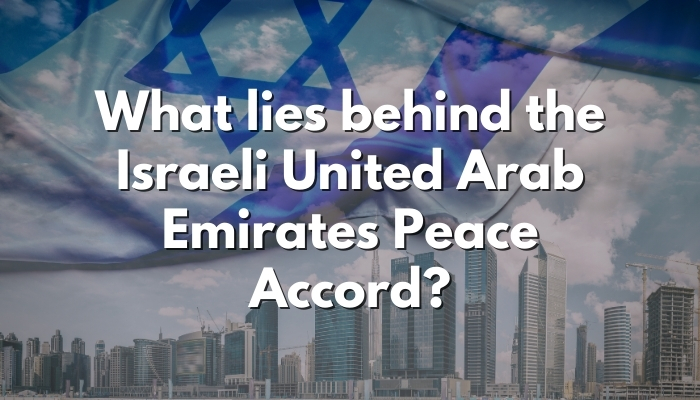 What lies behind the Israeli – United Arab Emirates Peace Accord?

On the Middle East Report join Simon Barrett and his guests Peter Baum who is the Co-Founder of South End Friends of Israel and Robin Benson, Christian political commentator.
In this programme they will be discussing what lies behind the peace agreement between Israel and the United Arab Emirates?
Last month the US Administration announced that they had brokered an historic peace agreement between Israel and the United Arab Emirates. The UAE becomes only the third Arab State to make peace with Israel.  This new peace agreement is a major diplomatic triumph for the Israeli Prime Minister Benjamin Netanyahu and US President Trump on what looks like will be a genuine and warm peace with normalisation of relations between the two nations.

Israel has achieved a huge step forward in reaching one of its main foreign and diplomatic policy objectives since the founding of the state in 1948 and that is acceptance and integration into the Middle East. It likely is it that other moderate Arab states will now follow in the footsteps of the UAE to make peace with Israel like Bahrain, Oman, Sudan, Morocco and even Saudi Arabia and this will this change Israel’s strategic position in the Middle East?

Join Simon and his special guests as they look at to understand why the United Arab Emirates have made the brave and courageous step of opening normal relations with the Jewish State with the complete backing of Saudi Arabia?

This historic peace agreement with the UAE as it is a game changer in the region that means that Arab states no longer go through the Palestinians leadership for Israel to be accepted in the Arab world. The Palestinian Authority still do not recognise Israel as a Jewish state and continue to support terrorism and incitement against the Jewish people.

They will be asking was one of the main reasons that the UAE made this historic announcement now is to help President Trump get re-elected in November’s Presidential election as they fear that the Democrats will empower the Iranian regime making the region more dangerous and precarious?

The UAE have stated that the price for the normalisation of relations between the two nations would be that Israel would have to drop the proposed extending Israeli sovereignty and Israeli law over the Jewish communities in Judea and Samaria and the Jordan Valley.

The latest development we see another signing on the Whitehouse lawn between Israel and the United Arab Emirates in lavish peace ceremony like we saw in 1979 with Egypt and the PLO in 1993.

Join them for all of this and more.

The Middle East Report Friday at 9pm repeated Sunday at 3.30.  Don’t miss it!