What a Biden Presidency means for Israel and the Middle East 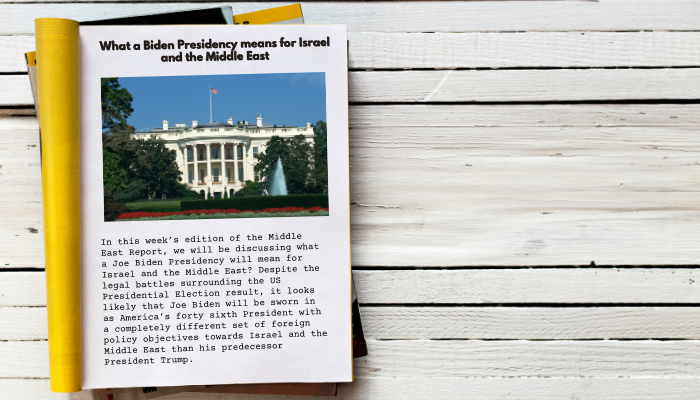 Despite the legal battles surrounding the US Presidential Election result, it looks likely that Joe Biden will be sworn in as America’s forty sixth President with a completely different set of foreign policy objectives towards Israel and the Middle East than his predecessor President Trump.

For the past four years, President Trump’s administration has totally transformed the Middle East by strengthening America’s traditional allies in the region from Saudi Arabia, Gulf States, and moderate Sunni Arab states.

Israel has not had a greater friend in the Whitehouse in President Trump, who recognised Israeli sovereignty over their eternal city Jerusalem and moved the US Embassy to Jerusalem. He recognised Israeli sovereignty over the Golan Heights .He cut the funding to the Palestinian Authority for their refusal to re-engage with the peace process, failure to address their incitement, hatred and glorification of terrorism directed at Israel and the Jewish people in their media and education system.

President Trump biggest foreign policy achievement in the Middle East was to bring peace to region as Bahrain and the UAE signed historic peace treaty with Israel. He also contained Iran’s nuclear ambitions and reinstated crippling sanctions on the regime that has meant that their financial support for their terrorist proxies in the region have had to undergo austerity cuts. The Middle East under his Presidency has made the world’s most dangerous and unstable region a safer place.

The big question that needs to be asked is will a Joe Biden’s administration build upon the success of the Trump Administrations policies towards the Middle East, or will he purse the failed policies of the Obama Administration.

There are troubling signs Biden administration will attempt to re-instate the controversial Iran nuclear deal that will give the regime billions of dollars in sanctions relief and allow the world’s most dangerous regime to build the world’s most dangerous weapon. This would also allow the regime to continue its ballistic missile programme and support for Islamic terrorism across the region.

The Israeli Prime Minister Benjamin Netanyahu will be concerned that a Biden Presidency will bring in the Palestinian Authority from the cold and pressure Israel to concede to the creation of a Palestinian State and undermining her security.

These potential policy moves by Biden could undermine the growing momentum of moderate Arab states in making peace for Israel, which would be a tragedy for the peace and stability in the Middle East.

Join Simon and his guests for this important programme, Friday at 9pm repeated Sunday at 3.30. Don't miss it!