We need Leadership and we need it now 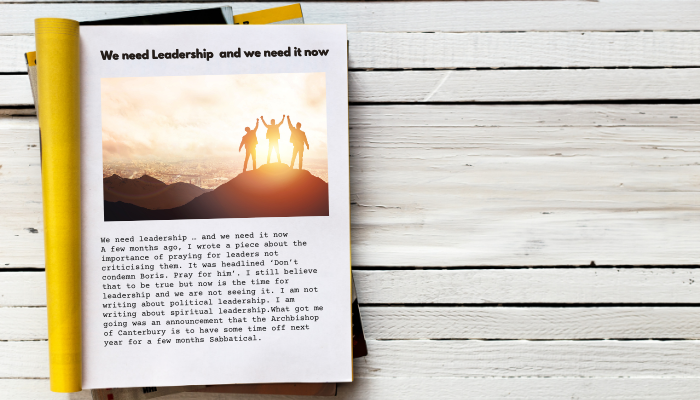 We need leadership … and we need it now

A few months ago, I wrote a piece about the importance of praying for leaders not criticising them. It was headlined ‘Don’t condemn Boris. Pray for him’. I still believe that to be true but now is the time for leadership and we are not seeing it. I am not writing about political leadership. I am writing about spiritual leadership.

What got me going was an announcement that the Archbishop of Canterbury is to have some time off next year for a few months Sabbatical. Apparently, all members of the clergy in the Anglican Church, even Archbishops, are entitled to a sabbatical every 7 to 10 year. The Archbishop, Justin Welby wrote on Twitter on Sunday: The Bible has lots to say about work and rest. I’ll be taking a sabbatical and study leave from May to early August next year. All CofE clergy can (and should!) apply for this every 7-10 years. It reminds us no minister is indispensable to the work of God. According to a Lambeth Palace announcement, the Archbishop will use his time away to focus on spiritual renewal.

I understand the need for time out and seeking God. But when we are in the midst of a battle - and that is what our nation is in at this time - does the commander leave the battlefield for a little bit of TLC, or the captain his ship. No! They stay at their post, knowing the importance of leading from the front and letting those around them see they are with them in the battle.

There is battle raging for the heart of the nation. Make no mistake about it. Not one involving the military trained troops on the ground. But a battle none the less. Paul put it well when he said: ‘We do not wrestle against flesh and blood, but against … spiritual hosts of wickedness’. What the church and the nation needs at this time is strong spiritual leadership. It is old fashioned to say ‘Thus saith the Lord …’ but that is what is needed at this time. I am sure that the Archbishop has been working hard, but haven’t we all. I was so saddened that as the Sabbatical announcement was made, he was also announcing he was joining forces with former Prime Ministers David Cameron and Tony Blair to warn against cutting the overseas budget. An important subject but I can think of many more important subjects for the pre-eminent spiritual leader of the nation to be pontificating about.

People are dying and want to know about what happens at death; about how to be prepared for the after life. People don’t know how to talk to God, and whether all ‘gods’ are the same. People want answers as to why God allows … Even practical things like why churches have to be closed and singing banned. People are looking for answers.

Please Mr Archbishop. Stand up. Speak out. Declare Thus saith the Lord. The people are waiting!