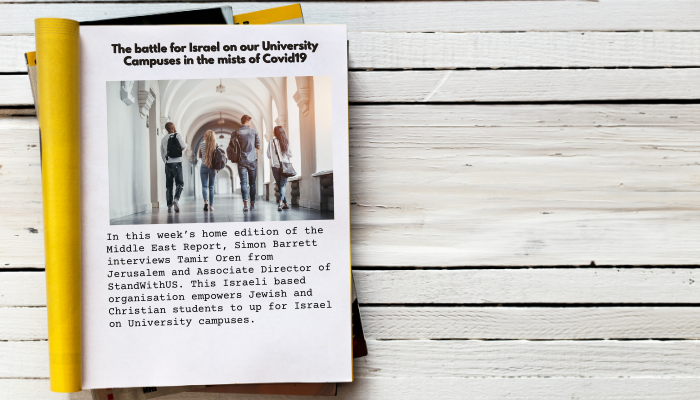 In this week’s home edition of the Middle East Report, Simon Barrett interviews Tamir Oren from Jerusalem and Associate Director of StandWithUS. This Israeli based organisation empowers Jewish and Christian students to up for Israel on University campuses.

In recent years University campuses in the West have become an academic battle ground against Israel where Israeli speakers have been denied the possibility to speak at Israeli events on campus. There has been an increase in anti-Semitic attacks against Jewish students especially on social media and Israel Apartheid week is nothing, but an Israel hate fest.

This past year has been especially difficult for British students due to the impact of Covid19 resulting in studies having been disrupted and having to self-isolate in their halls of residence. But for many Jewish students it has been much tougher with a raise in online Jew Hatred increasing. We discuss how StandWithUS is helping Jewish Students not feel alone and encourage and equipment them to stand up for Israel on campus.

Please watch this week’s home edition of The Middle East Report on Friday at 9pm where we discuss the battle for Israel on campus in the mists of the Covid19 pandemic.