The Inauguration of Joe Biden as the 46th President of America 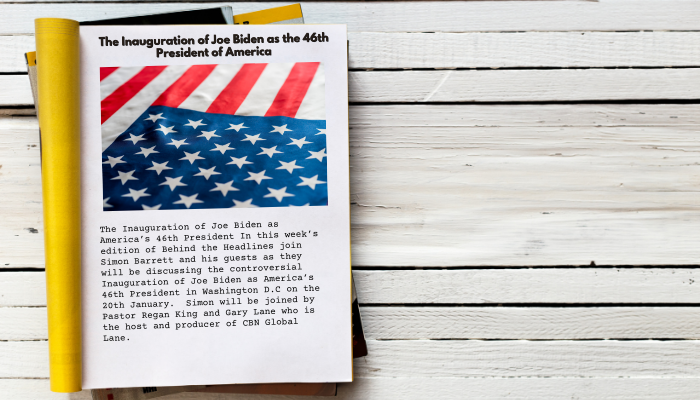 The Inauguration of Joe Biden as America’s 46th President

In this week’s edition of Behind the Headlines join Simon Barrett and his guests as they will be discussing the controversial Inauguration of Joe Biden as America’s 46th President in Washington D.C on the 20th January.  Simon will be joined by Pastor Regan King and Gary Lane who is the host and producer of CBN Global Lane.

The security surrounding the inauguration has seen the largest deployment of US troops to America’s capital city since the American Civil War in the nineteenth century with Washington divided between the Green and Red Zone resembling the Iraqi capital Baghdad. There will be 25,000 US soldiers and national guards be deployed to protect nation’s capital.

Joe Biden will be sworn into office on Wednesday 20th January and will be the 46th President of the United States of America and promising a United America and to bring Americans together in reconciliation. But is this a false narrative to hide the true agenda of his Democrat party’s extreme left wing government agenda as they control both houses of Congress giving Biden unpresented powers?

The big question is what will a Biden Presidency means for Bible believing Christians and the State of Israel and what is the policy agenda for his administration?

It is believed that Joe Biden plans to make eleven million illegal immigrants US Citizens and open US borders to large scale Immigration to the shock of US border police and businesses struggling to cope with the Covid19 pandemic.

He plans to make face masks mandatory to reduce Covid19 that has already taken the lives of over 400,000 Americans. He wants to reverse President Trump’s travel bans on hostile Muslim countries.

On climate change he wants the US to re-entre the Paris Climate Accord and wants to make the Equality Act a Federal Law bring more persecution to American Christians through discrimination.

On the Foreign policy front he wants the US to re-engage with globalism and International institutions as well a push for the creation of a Palestinian State and re-commit to the Iran deal.

There can be no doubt that a Biden Administration despite the President Elect being the only the second Catholic to hold high office in America will pursue an anti-Christian agenda.

If you care about the state of the world, we are living please watch Behind the Headlines on Wednesday night at 9 pm - repeated Friday at 2pm.

Do not miss it.