The Challenge of standing up in the Republic of Ireland 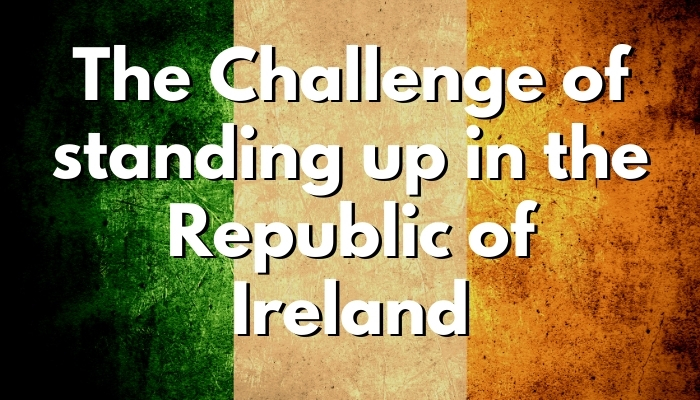 Join Simon Barrett on the Middle East Report as he interviews Jackie Goodall the founder and director of Ireland Israel Alliance as she discusses the challenges in standing up for Israel in the Republic of Ireland.

The Republic of Ireland has a reputation of being one of the most hostile western nations towards Israel and is very pro-Palestinian. The Israeli – Palestinian conflict is seen within the prism of the Irish Republican Army IRA conflict with Britain.

In recent years with the scandals in the Catholic Church the Ireland went from a strong conservative Catholic country to a very liberal nation dominated by far-left wing ideology.

In recent years we have witnessed the some of the most hostile and extreme anti-Israel legislation proposed anywhere in the world by some members of the Irish Senate damaging Israeli – Irish relations.

The Economic Activity Occupied Territories Bill that had some support from Southern Irish politicians but was opposed by the Irish government that made it a criminal office for someone to import or sell goods or services originating in an occupied territory with the clear intension of targeting Israel.

Irish Christians who love Israel would be shocked to discover that if they went to Israel and visited the old city in Jerusalem and brought some souvenirs or wine from the Golan Heights then they could be prosecuted with a very heavy fine or wait for it a 5 year prison sentence.

This bill is sponsored by Senator Francis Black who in 2016 signed a letter that called for a total boycott of Israeli goods and services not just from Judea and Samaria – the biblical heartland of Israel, East Jerusalem, and the Golan Heights.

They will be discussing how the supporters of this legislation have a naive view about Israel thinking that Israeli economy is like that of the Palestinians an agricultural economy not a modern hi-tech economy and if this legislation was passed then this would destroy Ireland’s economy as the big multi – national companies like Google, Microsoft etc who are in Ireland because of the low tax haven would have to choose from disinvesting in Israel which would cost them billions or to base themselves in Ireland.

Join them as they look at all of this and discuss the spiritual consequences in Genesis 12 verses 1-3 that God will bless those who bless Israel and curse those who curse Israel.

The Middle East Report Friday at 9pm repeated at 15.30 Sunday.  Don’t miss it!