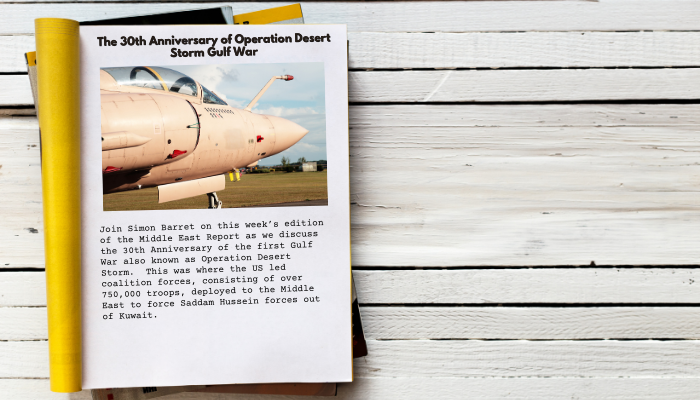 Join Simon Barret on this week’s edition of the Middle East Report as we discuss the 30th Anniversary of the first Gulf War also known as Operation Desert Storm.  This was where the US led coalition forces, consisting of over 750,000 troops, deployed to the Middle East to force Saddam Hussein forces out of Kuwait.

In this programme Major General Tim Cross a Christian discusses how his task was to organise the logistics of moving the British army to Saudi Arabia ahead of the military confrontation against the Iraqi forces occupying Kuwait. He is also discusses being part of the huge convey of British and coalition tanks and vehicles ready to engage with Saddam’s elite Republican Guards in Southern Iraq.

Whilst Major Rhett Parkinson discusses the historical contexts of the war as Saddam Hussein the Iraqi dictator refused to comply with UN Security resolution calling up him to remove his 300,000 troops occupying Kuwait. The deadline passed so on the 17thJanuary 1991 and two days later the air offensive Operation Desert Storm was launch with devastating effect.

Please watch this incredible interview as we look back at the dramatic events that shock the world thirty years with the start of the first Gulf War from a Christian military perspective.

This historical programme can be seen on Friday night at 9 pm exclusively on Revelation TV.