The 20th Anniversary of the book IBM and the Holocaust 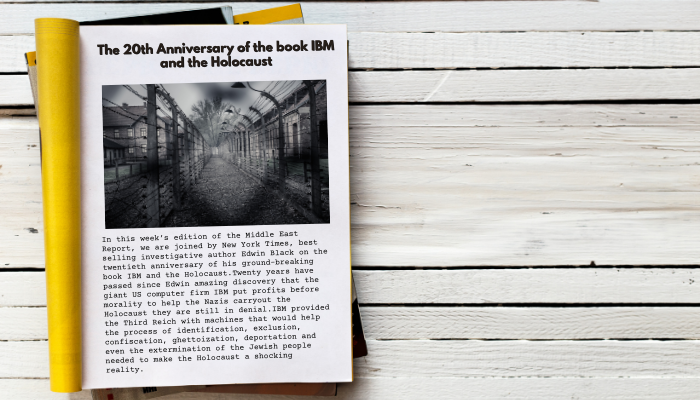 In this week’s edition of the Middle East Report, we are joined by New York Times, best selling investigative author Edwin Black on the twentieth anniversary of his ground-breaking book IBM and the Holocaust.

Twenty years have passed since Edwin amazing discovery that the giant US computer firm IBM put profits before morality to help the Nazis carryout the Holocaust they are still in denial.

IBM provided the Third Reich with machines that would help the process of identification, exclusion, confiscation, ghettoization, deportation and even the extermination of the Jewish people needed to make the Holocaust a shocking reality.

There was an IBM office in every Nazi concentration camp, where the IBM machines were punch cards could provide detail information and help with the categorisation of Holocaust. The machines would have codes for Jewish prisoners was 6 and a code for the Gas Chambers was 8 this allowed the Nazis to murder the Jewish people on an Industrial scale.

The CEO of IBM Thomas J. Watson during the Second World War received a percentage of every Nazi transaction and in 1937 was honoured by Hitler in Berlin. IBM had a 12-year evil alliance with the Nazis from when Hitler came to power in 1933 to when the regime came to an end with the death of Hitler in May 1945. Sadly, even today IBM has not come to terms with its Nazi past and the role it played in making the final solution possible.

If you want to know more about how corporate greed proceeded over morality and the role played by the US giant Computer company with New Times best seller Edwin Black then watch the Middle East Report this Friday at 9 pm exclusively on Revelation TV.