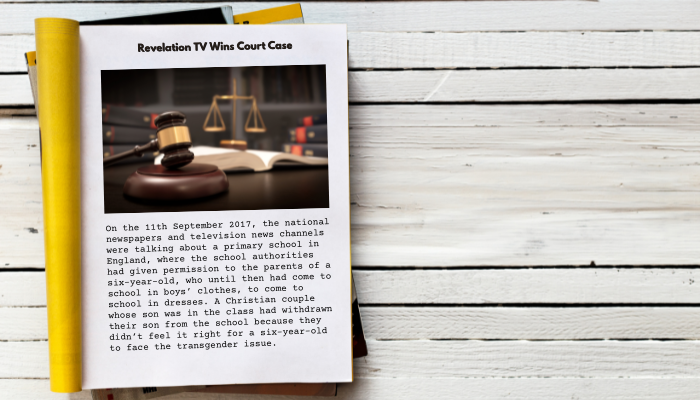 On the 11th September 2017, the national newspapers and television news channels were talking about a primary school in England, where the school authorities had given permission to the parents of a six-year-old, who until then had come to school in boys’ clothes, to come to school in dresses. A Christian couple whose son was in the class had withdrawn their son from the school because they didn’t feel it right for a six-year-old to face the transgender issue.

The live daily R Mornings programme on Revelation TV talked about the issues and sought to draw viewers back to what the Scriptures said on the matter. In the opinion of most viewers and senior management of the TV station, the matter was dealt with sensitively and biblically. One viewer complained to the Spanish authorities, accusing Revelation of humiliating and being disrespect to transgender and homosexual people.

Based on the complaint the Spanish licensing authorities asked for a transcript of the entire programme, translated into Spanish. After a short period of deliberating on the issue, they decided Revelation TV were guilty. They imposed a fine which they said was 3,600 euros if the TV station accepted the decision. They told the TV station that if they did not accept the decision, the fine would increase to 6,000 Euros. Revelation TV decided that they would not accept the decision, and appealed to the courts and submitted their defence.

This week, the Court in Madrid has handed down its decision. Revelation TV has been cleared off all the charges against it. The judge in his summing up stated: the comments … at no point encouraged hatred towards homosexual or the transgender community.

As a Christian TV station, we believe it important to discuss national and international news and to share the truths of Scripture in a loving and compassionate way. We will seek to continue to do that.