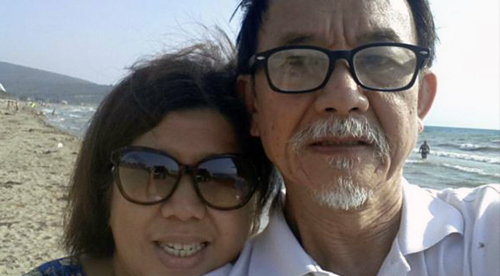 Pastor Koh and his wife Susanna

The Malaysian Home Minister, Tan Sri Muhyiddin, announced that a special taskforce will investigate the abduction of Pastor Koh following a report carried out by SUHAKAM that concluded that his disappearance was executed by State agents.

The Human Rights Commission of Malaysia, SUHAKAM (Suruhanjaya Hak Asasi Manusia Malaysia), announced last month that the panel was of the unanimous view that Pastor Koh was a victim of an enforced disappearance. The chair of the panel, Dato’ Mah Weng Kai said: “The direct and circumstantial evidence in Pastor Raymond Koh’s case proves, on a balance of probabilities, that he was abducted by State agents, namely, the Special Branch, Bukit Aman, Kuala Lumpur.” The panel also concluded that there had been state involvement in the disappearance of activist Amri Che Mat, who is a Shia Muslim, a branch of Islam banned in Malaysia.

Henrietta Blyth, CEO of Open Doors UK and Ireland, said: “The SUHAKAM report was a very significant and bold step forward in pursuit of those who are behind Pastor Koh’s kidnapping. We are delighted that it has led to the decision to set up a taskforce which will hopefully reveal what has really happened to Pastor Koh. His family have suffered for so long and deserve to know the true facts.”

Pastor Koh has been missing since 13 February 2017 when his car was surrounded by three vehicles while he was driving along. He was forced out of his car, into another vehicle and driven off. His car was also driven off and has not yet been found. Footage caught on CCTV cameras showed that at least 15 masked men wearing black took part in the operation.

The SUHAKAM panel indicated the following similarities in the cases of Pastor Koh and Amri Che Mat: both were targeted by religious authorities and the police on allegations that they were involved in matters against Islam in Malaysia; there was direct surveillance on their activities before they disappeared; both abductions were carried out in the same manner; the presence of a gold colour Toyota Vios in both cases.

The wife of the disappeared pastor, Susanna Koh, said: "God is good. He answers more than we can imagine or think. Even though the enemy plans evil, God will turn it for good.”

“Father, forgive those who have kidnapped Pastor Koh, for they do not know what they are doing. May the Gospel prosper in the place Pastor Koh is being held (Philippians 1:12-13). And we ask for his safe and quick release in the name of Jesus Christ. Amen."

Henrietta Blyth was interviewed on Revelation TV’s Persecuted Church, it was a fascinating episode as she shares about the most dangerous countries to be a Christian. Malaysia is number 42 on the 2019 World Watch List. There are 2.9 million Christians in Malaysia, they make up just over nine per cent of the total population of 32 million. Below is a short interview between Open Doors USA CEO David Curry and Susanna Koh, wife of Pastor Raymond Koh.