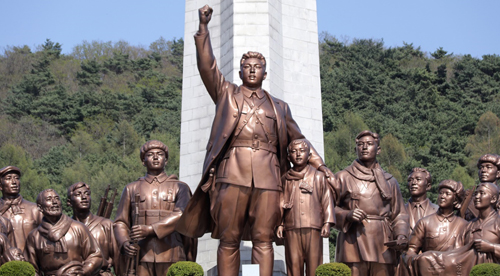 A propaganda statue in the northern region of North Korea

Reports of increased surveillance and pressure on North Korean defectors in China is confirmed and the situation is becoming progressively worse.

An Open Doors researcher who wished to remain anonymous for their safety said: “We can confirm that there is intense surveillance in both North Korea and North East China. It seems that the North Korean and Chinese governments are working closely together.”

President Xi Jinping travelled to North Korea for a meeting with Kim Jong-un on 20 June. It was the first Chinese state visit to the North since 2005. China is a main trading partner for North Korea and as such the meetings were vital for Kim Jong-un, especially as the Hanoi summit between President Trump and Kim was cut short without an agreement in February.

Even if a North Korean defector is able to escape the country, the north is still able to exert pressure on them through their family members. North Korea practises collective punishment, meaning that family members can be punished for the actions of a relative: “Family members of North Korean defectors are being held hostage in their own country,” said the Open Doors researcher. “This could be to keep the defectors from working with human rights groups and churches, or even to pressure the refugees to come back. Sometimes these returning defectors are being trained to become spies and then sent out again. This is not voluntary, of course. They have no choice.

“A clear example of this is from April 2016, when a woman contacted Pastor Han, a Korean-Chinese who led Changbai church. She met with the pastor, but had brought other secret agents who then brutally murdered him. The woman had been helped by Han in the past, but she was forced to betray him.”

“All in all the security situation in the border area is really tense,” said the Open Doors researcher. “Please pray the situation will improve!”

North Korea is number 1 on the Open Doors World Watch List. Henrietta Blyth, CEO of Open Doors UK and Ireland shares about the most dangerous countries to be a Christian on the Persecuted Church. Modern day North Korea was founded by Kim Il-sung, and the family are worshipped as gods. Anyone who dares to believe in a higher authority than the Kim family is considered an enemy of the state. The North Korean regime demands absolute loyalty and obedience. Portraits of the Kim family must be hung in all homes and schools. The first words parents must teach their children are ‘Thank you, Father Kim Il-sung’. Christians must keep their faith completely secret. If a Christian has a Bible, or part of one, it will be carefully hidden and only read when they are sure they are alone. Most Christians do not even tell their own children about their faith for fear that they may accidentally reveal their parents secret. There are an estimated 200,000 and 400,000 Christians in North Korea. Of those, between 50,000 and 70,000 Christians are imprisoned. As enemies of the state, Christians who are not executed have to do forced labour and are often tortured; most never escape.

"Heavenly Father, You know that North Korea is referred to as the “hermit” kingdom, because it has a reputation for being one of the most isolated nations on earth. We ask that the church in North Korea will grow more and more in the face of persecution, and Your Kingdom come, Your will be done in North Korea as it is in Heaven. In the name of Jesus. Amen!"