Making a life in Israel 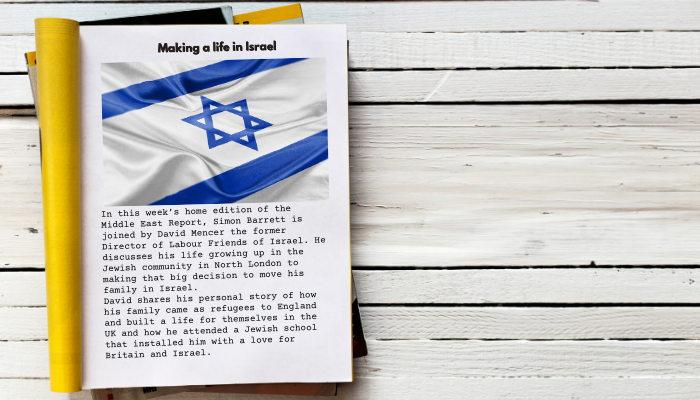 In this week’s home edition of the Middle East Report, Simon Barrett is joined by David Mencer the former Director of Labour Friends of Israel. He discusses his life growing up in the Jewish community in North London to making that big decision to move his family in Israel.

David shares his personal story of how his family came as refugees to England and built a life for themselves in the UK and how he attended a Jewish school that installed him with a love for Britain and Israel.

We discuss his passion for politics and his desire to get involved by joining the Labour party under the leadership of Tony Blair to becoming a parliamentary assistant for various Labour MP’s. Through that experience he was given the high-profile position of being the Director of Labour Friends of Israel. He took seventy Labour Members of Parliament out to Israel so that they could see the country for themselves.

He also discusses how the accession of Jeremy Corbyn as leader of the Labour party and presided over an increase in Jew Hatred within the party was one of the main reasons why he left the UK to make Aliyah in Israel.

We discuss his new life living in Tel Aviv and working for Honest Report that seeks to inform and educate Journalists about Israel and the Middle East.

Please watch this home edition of The Middle East Report this Friday at 9pm for an inspirational and encouraging interview.