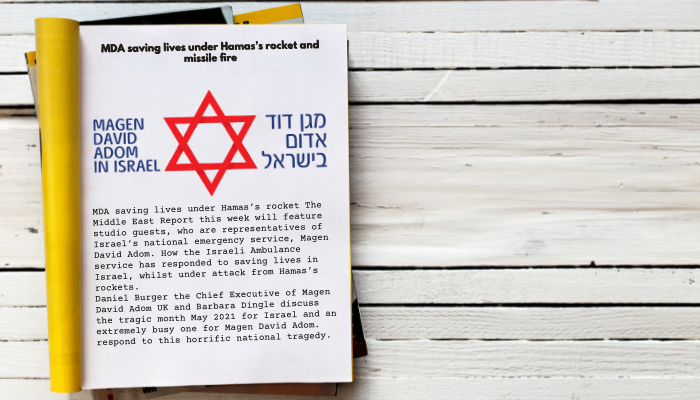 The Middle East Report this week will feature studio guests, who are representatives of Israel’s national emergency service, Magen David Adom. How the Israeli Ambulance service has responded to saving lives in Israel, whilst under attack from Hamas’s rockets.

Daniel Burger the Chief Executive of Magen David Adom UK and Barbara Dingle discuss the tragic month May 2021 for Israel and an extremely busy one for Magen David Adom. On the 31st of April, Israel was hit with the worst tragedy in its history as forty-five Ultra-Orthodox men and boys died and over 150 were injured in a horrific stampede at Mount Mermon in Northern Israel. MDA paramedics had to respond to this horrific national tragedy.

If this national tragedy were not enough to contend with for Magen David Adom this was followed a few days later with Palestinian riots up on the Temple Mount in Jerusalem. Stocking stories emerged of MDA paramedics were responding to emergency calls were attacked with stones, clubs, and metal bats.

This was compounded when Hamas fired over 4000 rockets and missiles into southern and central Israel and MDA paramedics had to treat the injured under the fire of these deadly rockets. Daniel went on a fact-finding mission to Israel to find out for himself the truth of the devastation caused by Hama’s missiles and how MDA responded to this crisis.

Please join Simon Barrett for this week’s The Middle East Report on Friday at 9pm as we discuss role played by Magen David Adom in Israel’s military crisis against Hamas.