Living as a Blind Christian 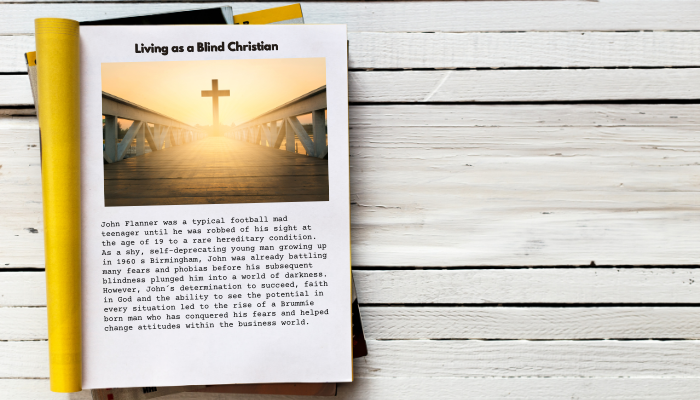 John Flanner was a typical football mad teenager until he was robbed of his sight at the age of 19 to a rare hereditary condition. As a shy, self-deprecating young man growing up in 1960 s Birmingham, John was already battling many fears and phobias before his subsequent blindness plunged him into a world of darkness.

However, John´s determination to succeed, faith in God and the ability to see the potential in every situation led to the rise of a Brummie born man who has conquered his fears and helped change attitudes within the business world.

John was the first recipient of the prestigious National Civil Service Diversity Award in 2006 and is now a sought-after motivational speaker using his personal experiences in overcoming unexpected disability to inspire and encourage businessmen and women across the UK.

Fear Fun and Faith is the inspirational story of an ordinary man who has led an extraordinary life. Join John as he takes you through the twists and turns of his personal journey with his trademark humour and witty writing style, peppered with plenty of emotional anecdotes and more than one miracle along the way.

Join Kurt & Melanie as they interview John this week on Insight Live.