Is the Spiritual Health being threatened with the Covid 19 Restrictions 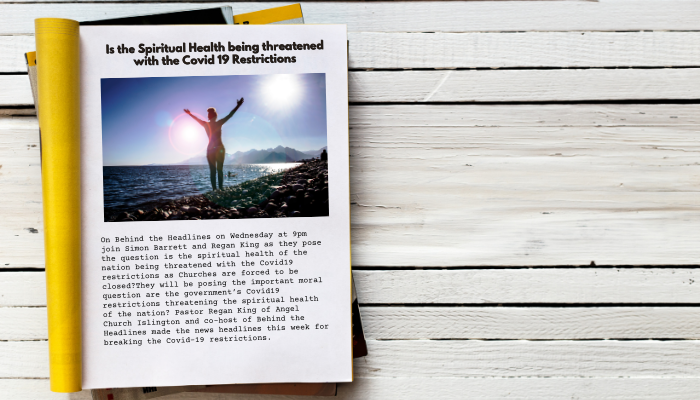 On Behind the Headlines on Wednesday at 9pm join Simon Barrett and Regan King as they pose the question is the spiritual health of the nation being threatened with the Covid19 restrictions as Churches are forced to be closed?

They will be posing the important moral question are the government’s Covid19 restrictions threatening the spiritual health of the nation? Pastor Regan King of Angel Church Islington and co-host of Behind the Headlines made the news headlines this week for breaking the Covid19 restrictions.

On Sunday 15th November, Pastor Regan King, held a Baptism Service at his Church with twenty worshippers in attendance that became thirty before twenty Covid19 police officers stopped the Church service and allowed a short service outside.

Pastor Regan Kings actions made the national news headlines and has raised the especially important question is the government in trying to protect the health of the nation actually threatening the spiritual health of the nation as Churches have been forced to close. Religious freedom is one of our most cherished tenants of our democracy and since the first national lockdown Churches have been forced to close meaning that millions of Christians across the country have missed out on fellowship, friendship and much needed spiritual nourishment.

Pastor Regan King will, on this programme, tell his story of why he opened his Church to allow a baptism to take place knowing that this was against the Government’s Covid19 restrictions? Hear his reaction to 20 police officers turning up together with the circus of journalists that became a national news story.

Does a North London Church being open for the spiritual needs of the congregation and the local community justify twenty police officers from the London Metropolitan Police force investigating this breaking of Covid19 restrictions?

There were more police officers trying to break up this church service than there would be at an anti-terror raid and have we our police force in this country become the Covid19 police force and we heading down the dangerous road of being a police state?

The moral dilemma that we all face as Christians in this Covid19 pandemic is do we risk putting the spiritual health of the nation first and ignore the Government Covid19 restrictions?

What would happen if every Church across the British Isles decided to ignore the Government’s Covid19 guidelines and open their doors would such an action be irresponsible or a necessity to preserve Religious freedom?

Join them, Behind the Headlines, 9pm Wednesday repeated Friday 2pm don't miss it!