Is the Monarchy Still Relevant 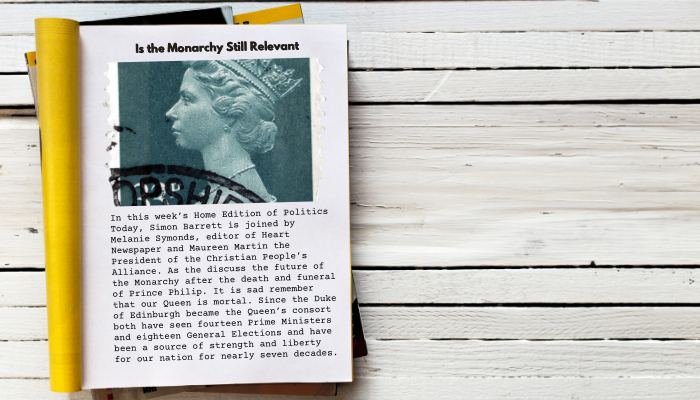 In this week’s Home Edition of Politics Today, Simon Barrett is joined by Melanie Symonds, editor of Heart Newspaper and Maureen Martin the President of the Christian People’s Alliance. As the discuss the future of the Monarchy after the death and funeral of Prince Philip. It is sad remember that our Queen is mortal. Since the Duke of Edinburgh became the Queen’s consort both have seen fourteen Prime Ministers and eighteen General Elections and have been a source of strength and liberty for our nation for nearly seven decades.

The question must be asked what will happen to the Monarchy after the Queen’s long reign and her dedication to her Christian faith and service to the nation as head of state?

We discuss is the Monarchy still relevant to British society and when Prince Charles becomes King will be a defender of the faith or the defender of faiths?

Please join us for this week’s Home Edition of Politics Today on Thursday at 8.30pm as we discuss the Queen’s reign and the future of the Monarchy?