Is Freedom of Speech under threat 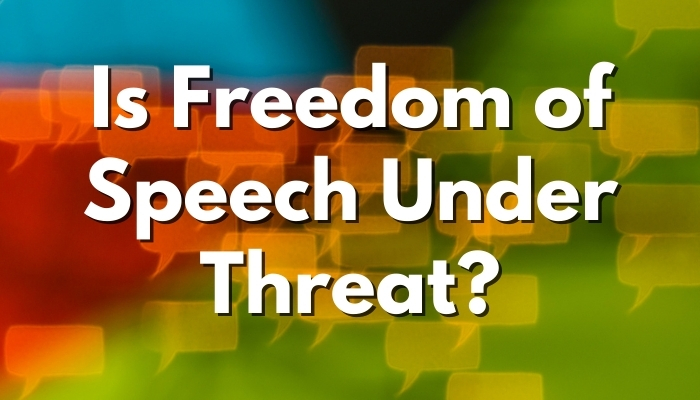 On Politics Today join Simon Barrett and Robin Benson (Christian Political Analyst) aswell as Melanie Symonds (Editor of Heart Newspaper) as they discuss whether freedom of speech is under threat by extreme environmental protestors and with the raise of Covid 19 case could we be heading for another national lockdown?

They will be asking why are we seeing so many protests either by BLM or Climate Change protestors in the mists of a global pandemic Covid 19 and yet Churches remain closed?

Climate Change protests organised by Extinction rebellion at newspaper printing sites that stopped over 1.5 Million newspapers being delivered on Saturday 5th September stopping Conservative newspapesr being delivered is not only a threat to freedom of speech in this country but also a threat to the freedom of the press. These disruptive protests have resulted in new laws to be drafted up to protect freedom of the press with protestors treated as saboteurs of democracy.

The government Subversion Power Act, according to the Sunday Times, would give power to the State to protect national infrastructure, printing plants, Parliament, courts, key pillars of our democracy but there is a danger that the Subversion power act could be used against Christians who do not follow the liberal agenda of the government.

Why did it take the Police hours to act against the 150 extreme protestors despite the Home Secretary Priti Patel demanding Cressida Dick, the Met Commissioner, stop the protests but the police stood still for hours and watched and did nothing until after midnight.

There is a fundamental attack of freedom of speech especially on Social media and is this due to the decline and influence of Christianity in our nation?

The other topic up for discussion is with the number of Covid 19 cases on the raise again with the government to introduce new measures to stop gathers of over 30 people what impact with this have on church life in the UK?

If Covid 19 cases continue to raise could we see another Autumn of Winter national lockdown and what will this mean for all of us?