Is China Developing the Mark of the Beast 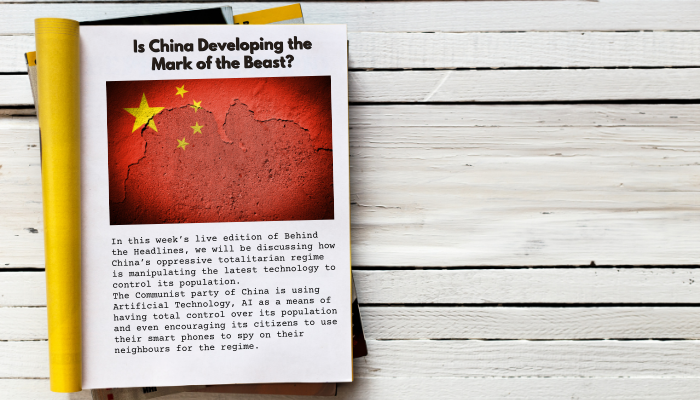 In this week’s live edition of Behind the Headlines, we will be discussing how China’s oppressive totalitarian regime is manipulating the latest technology to control its population.

The Communist party of China is using Artificial Technology, AI as a means of having total control over its population and even encouraging its citizens to use their smart phones to spy on their neighbours for the regime.

The Chinese government has also installed over half a billion surveillance cameras across the country that spy on their citizens and use AI technology to calculate a citizen’s social credit score that determines benefits or harsh punishments. Chinese individuals that praise and obey the orders of the regime are rewarded with benefits such as better jobs, housing, and social standing. This is in complete comparison to those critical of the Chinese government face hardships included being put in poor housing, poor job prospects, low social standing, imprisonment or even death.

This mass and oppressive Surveillance is right out of George Orwell book 1984 where the eyes of the State are always watching you and is Big Brother in action. The Chinese government is also using biometric and emotional surveillance with face recognition technology. It is not difficult to imagine that in the future this technology will be used by the Anti-Christ and will be the technological infrastructure that will be the mark of the beast as mentioned in the book of Revelation.

So if you are student of bible prophecy or concerned about the current state of the world then you have to watch this week’s Behind Headlines live at 9pm.