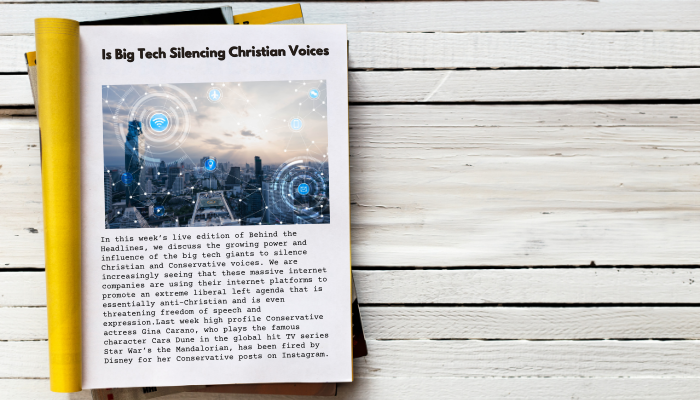 In this week’s live edition of Behind the Headlines, we discuss the growing power and influence of the big tech giants to silence Christian and Conservative voices. We are increasingly seeing that these massive internet companies are using their internet platforms to promote an extreme liberal left agenda that is essentially anti-Christian and is even threatening freedom of speech and expression.

Last week high profile Conservative actress Gina Carano, who plays the famous character Cara Dune in the global hit TV series Star War’s the Mandalorian, has been fired by Disney for her Conservative posts on Instagram.

She posted on her social media post, a picture from the Holocaust with the following description “Jews were beaten in the streets, not by Nazi soldiers but by their neighbours … even children.

Because history is edited, most people today do not realise that to get to the point where Nazi soldiers could easy round up thousands of Jews, the government first made their own neighbours hate them simply for being Jews. How is that different from hating someone for their political views? Despite deleting the post, she has been sacked by Disney.

We also witnessed President Trump’s twitter account was deleted by Twitter with over 50 million followers that was his main means of communication during his time in office and this has been followed by the closure of the Conservative social media platform Parlor.

In this current climate of woke and cancel culture is threatening our freedoms and our ability to express our Christian views and political opinions. We are in danger of losing our freedom of expression and thought, we have enjoyed in the west for centuries.

To understand the current climate of liberal intolerance, hatred, and cancel culture and how these big tech giants are silencing Christians voices and how should we respond as Christians please watch this week’s Behind the Headlines live on Wednesday at 9pm.