INDIA, Hindus come to Christian faith because of miraculous healings 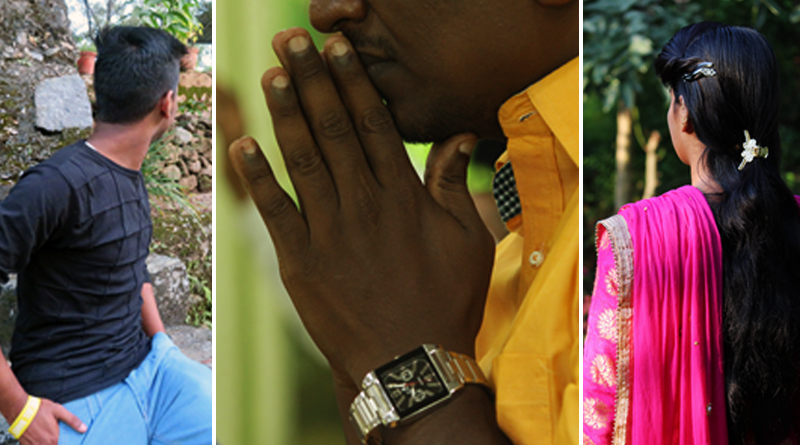 Indians are coming to Christian faith after miraculous healings thanks to the extraordinary power of prayer.

Raman*, 29, grew up in a Hindu family, where his grandfather, a Hindu priest, would sacrifice animals for gods and perform curses for a fee. His mother also made money using black magic. At the age of nine, Raman started to become sick and he would frequently collapse: “At that time, I was determined that there was no god, because I was asking, ‘Why do I have to suffer like this?’” He says he began to hear evil voices whispering dark thoughts and urging him to carry out acts such as attacking other people and killing himself. He became a danger to himself and to others, so the villagers advised his mother to chain him up to prevent him from hurting someone. He was chained for months – no one knew what to do to help him.

One day, Raman’s mother was advised to take him to church. She did so, and the Christians prayed for him. Raman says that within a month he was healed completely.  While his mother and sister became Christians and joined the church following Raman’s miraculous healing, he was still not interested in God. It took seven more years and a terrible accident before Raman became a Christian. One day, he was on a motorcycle when he hit a big truck. Raman was severely injured and at the point of death. The pastor of the church where his mother and sister attended, and many of the church members, started praying for Raman. On the 21st day, Raman woke up and started walking. While others praised God, Raman was discontented: “I was looking awful, I had scars on my face and I had to walk with crutches. I didn’t feel happy at all. I told my Mum, ‘If God really healed me, then I want to walk without those crutches.’ My Mum prayed for me. Within a week, all the strength came back into my legs. That was the moment I realised that Jesus healed me.” Now, in place of those evil voices that once plagued him, Raman says he hears the voice of the Holy Spirit: “This is such a different voice. It gives me peace.”

Through persecution and accusations of accepting a “foreign” God, he became Pastor Raman and planted a church in a new place he moved to with his wife. The bigger his church grew, the more severe the persecution by Hindu extremists became: he and his wife were knocked off their bike and she lost their unborn baby; Raman was injured when his church was set on fire while he was inside. Despite all this, Pastor Raman has continued to serve his congregation and is determined to plant churches in villages around his town.

Another Christian, Raj*, started his journey to his new faith after his mother was healed from arthritis through prayers.

Raj lost his father when he was 16. Living in poverty was very hard and on top of all their troubles, his mother was ill and in pain. Following someone’s advice, Raj asked a local pastor to pray for his mother, but was very sceptical it would help. “What I knew about prayer is that many people will pray but they will charge you for it,” said Raj. But a pastor came and prayed, and didn’t ask for money. To everyone’s amazement, Raj’s mother started feeling better. The family was invited to church that night. The pastor gave Raj a New Testament to read and within a month Raj, his mother and brothers were baptised.

“Right now, our faith has grown and is really strong. My Mum also stopped worshipping the idols,” Raj said. “Once we became Christians, we saw that our lives were transformed. It’s something from inside out. The real God and the real joy is in Jesus and that’s where I find peace.” Raj’s relatives who once accused the family of converting to Christianity for money, now visit them when they are sick and ask for healing prayers.

Another Christian, Meeta*, was just five years old when she was diagnosed with the same mental illness that had caused her mother to be permanently hospitalised.

Meeta was refused entry to the local school because staff were worried she might hurt another child. While her desperate father was trying to deal with the situation on his own, someone advised him to seek prayer for his wife and daughter from a Christian pastor and he did so. To the amazement of everyone, both Meeta and her mother were completely healed after attending the prayer time.

Meeta recalls: “Though I was very small, I still remember the terrible feeling when I was sick. Jesus healed me from that. He gave His life for all of us. I am alive and well today because of Him.” Following the miraculous healing, many people in their neighbourhood started visiting the family for prayer. Meeta’s parents would pray for everyone in the name of Jesus and eventually, they established a small house church in their own home. Soon the congregation grew to over 500 people. However, with the church came the persecution. Meeta says her father was attacked several times but never gave up his faith.

Dr Matthew Rees, Head of Advocacy at Open Doors UK and Ireland, said: “It is truly wonderful that these people experience the real power of prayer which is capable of healing the body and soul of the one who desperately needs it.  After becoming Christians, many people that have been healed move on to share their newly-found faith, despite all the dangers that are awaiting them.”

India is number 11 on the Open Doors World Watch List ranking the 50 countries where it is most difficult to be a Christian. 64 million Christians live in India – less than five per cent of the total population. Henrietta Blyth, CEO of Open Doors UK and Ireland shares about the most dangerous countries to be a Christian on the Persecuted Church. Brother Shibu Thomas founder of Persecution Relief India reveals the currrent situation in India and shares wonderful testimonies of a Saul becoming a Paul. Make sure you don’t miss other episodes about what's happening to our persecuted family in the world right now that you need to know about.