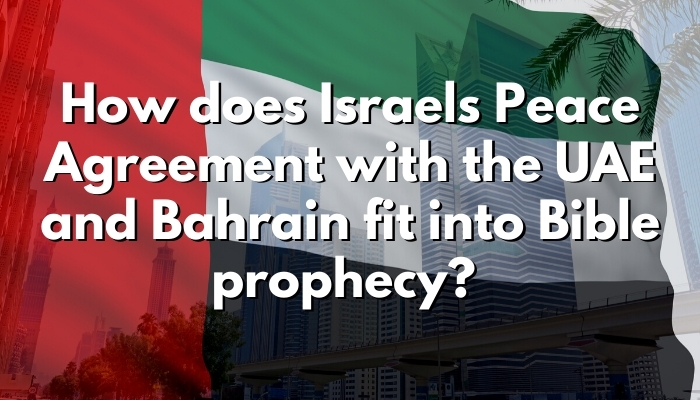 How does Israel's peace agreement with the United Arab Emirates and Bahraid fit into Bible prophecy?

On Behind the Headlines join Simon Barrett and Regan King as they discuss the historic peace agreement with Israel and the United Arab Emirates and Bahrain and how this fit into bible prophecy?

In August 2020, the Arab State of United Arab Emirates agreed to normalisations of relations with Israel that has been followed by Bahrain making only the third and forth Arab States to make peace with Israel.

The Israel – UAE peace agreement known as the Abraham Accord sponsored by the Trump Administration with see the formalisation of relations between the two countries on Tuesday 15th September on the Whitehouse lawn just before the New Jewish Year Rosh Hashanah.

In attendance will be the Israeli Prime Minister Benjamin Netanyahu and the Crown Prince brother and Foreign Secretary of the UAE Adullah bin Zayed.

These historical peace agreements have been brokered by the Trump Administration through empowering the moderate Arab Sunni states against Iran and its satellite states and resurgence Turkey.

The countries have committed to the exchange of embassies and ambassadors, and to begin cooperation in a broad range of fields including education, healthcare, trade, and security.

As part of the Abraham Accord freedom of worship will be opened for all on the Al – Aqsa Mosque the site of the first and second Jewish temple accord to Al Jazeera.

They will be discussing how does this historical peace agreement fit into bible prophecy and does it fulfil Ezekiel prophecies in Ezekiel 38 and 39 that Israel will be living in peace and safety before she is invaded by Russia and a consultum of Islamic states.

They will also be discussing how after the rapture of the Church the Anti-Christ the one world leader will sign a seven-year peace treaty with Israel that signal the start of what the bible describes as the Tribulation.

Join them for Behind the Headlines, Wednesday 9pm repeated Friday at 2pm.