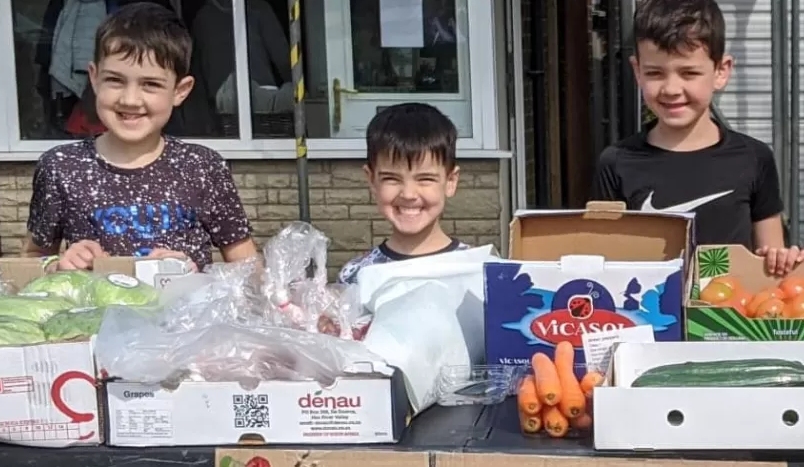 When Angela Barry's grandfather died last year she realised just how difficult many of his generation were finding life, often feeling isolated.

As the country began to go into quarantine, she was determined to ensure that the older people in her community didn't feel alone.

Her solution - fruit and vegetables.

Along with her husband and three children, she's set up a weekly free fruit and veg stall outside her house in Breightmet, Bolton as well as delivering bags of fresh produce to those who need it most.

So far they've served 50 isolated neighbours during the lockdown.

"We were ordering some fruit and veg for ourselves and then we just ordered extra to put out a stall," Angela told Premier. "We just put it out for everyone for to come and get what they needed.

"We have a lot of older people that live nearby and obviously with what's going on a lot of them are having to stay in who wouldn't usually. Usually they'd be quite capable of going out and getting their own things."

Sons Joshua, nine, Ben, seven, and Isaac, four (pictured above) have been manning the stall and the family says it's created so many opportunities for new relationships.

"This is a really great time for us as a church to be the light," Angela said. "Church doors are closed. We're all at home and it's a brilliant chance for us to really show what church is, in our in our local community where we live.

"We're so busy sometimes that you just miss your neighbours. As Christians we're so busy trying to outreach, put on church initiatives and do church events. We've never had this opportunity before where you can really invest into your neighbours because you can't go anywhere else. "

While the local supermarket has donated spare food to help the family's efforts, they've funded most of it themselves.

They're now fundraising to enable them to do more.

Angela says it may not be a fruit and veg stall, but everyone can play their part in helping people through this pandemic.

"I think now more than ever, we just need to be the light, we need to do something and I think just going knocking on your neighbour's doors just to ask if they're okay, just to leave your phone number. It's something really simple.

"We started with the fruit and veg stall but then we put together bags of fruit and veg together as people aren't getting the fresh stuff and I think anyone could do it anywhere you are."