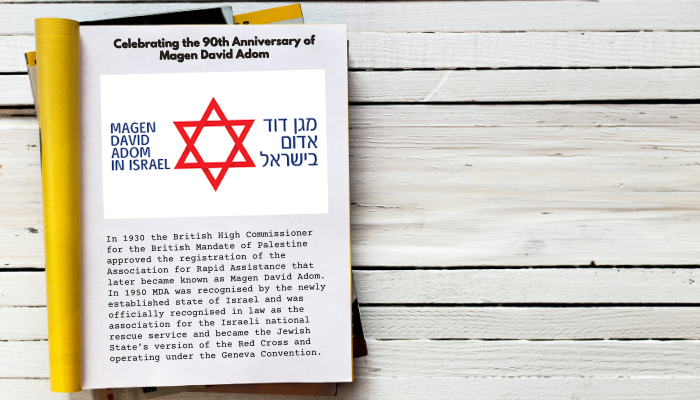 On the Middle East Report, join Simon Barrett and guests as they discuss the 90th Anniversary of Magen David Adom and a look back at 2020 that was extraordinary year for Israel’s national emergency service.

In 1930 the British High Commissioner for the British Mandate of Palestine approved the registration of the Association for Rapid Assistance that later became known as Magen David Adom.

In 1950 MDA was recognised by the newly established state of Israel and was officially recognised in law as the association for the Israeli national rescue service and became the Jewish State’s version of the Red Cross and operating under the Geneva Convention.

Since the pioneering days of the 1930’s Magen David Adom has had to deal will the challenges of five major wars, terrorism, suicide bombings, rocket and missile attacks and now Covid19. Their experience in dealing with national emergencies are only second to the Israel Defence Force as the most trusted and loved national institution in Israel.

In recent years, the work of MDA has been aided with the help of Christian Friends of Magen David Adom that has mobilised Christian support for this Israeli institution by saving lives in Israel.

Tune in to watch this week’s Middle East Report as we report on the dramatic year 2020 was for Israel’s national emergency service Magen David Adom.

Friday at 9pm repeated Sunday at 3.30 - always an inspiring and informative programme.