Are we heading towards an Authoritarian State 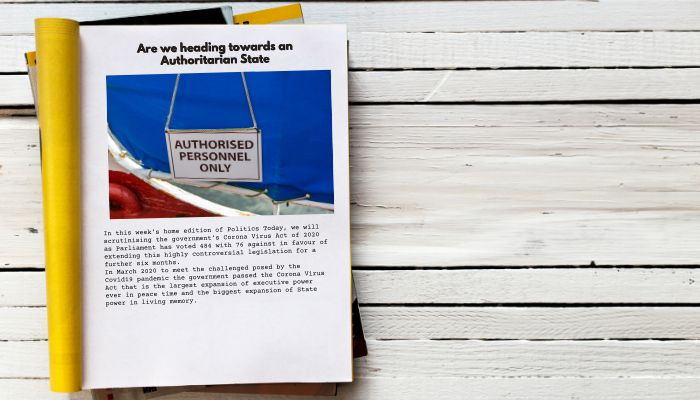 In this week’s home edition of Politics Today, we will scrutinising the government’s Corona Virus Act of 2020 as Parliament has voted 484 with 76 against in favour of extending this highly controversial legislation for a further six months.

In March 2020 to meet the challenged posed by the Covid19 pandemic the government passed the Corona Virus Act that is the largest expansion of executive power ever in peace time and the biggest expansion of State power in living memory.

The Corona Virus Act gives the government powers to suspend elections, close ports, ban protests and detain potentially infectious citizens and is the greatest suspension of our personal liberties in peace time. We ask why has the government extended these emergency powers when death rate of the virus is down to eighteen out of a population of sixty million and infection rates the lowest since early September for a further six months?

We question why there has been no real Parliamentary scrutiny of this legislation even though seventy six’s members of Parliament voted against it including thirty-five Tory rebels. Why has our mainstream media not objectively discussed or analysed this controversial legislation. Please join us for this week’s home edition of Politics Today on Thursday at 8.30 pm where we ask are we heading down the road to an authoritarian state?