Are we heading for a war with Russia 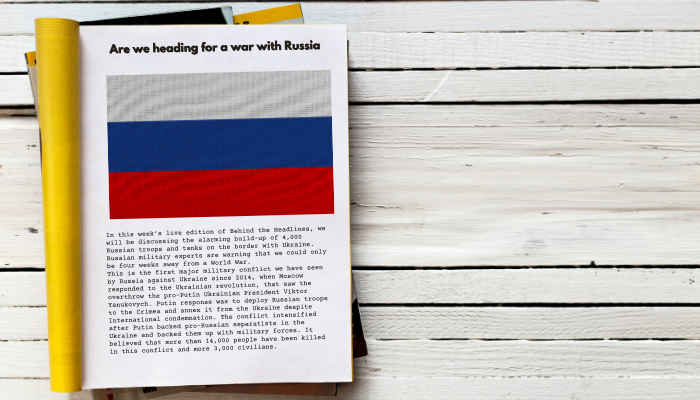 In this week’s live edition of Behind the Headlines, we will be discussing the alarming build-up of 4,000 Russian troops and tanks on the border with Ukraine. Russian military experts are warning that we could only be four weeks away from a World War.

This is the first major military conflict we have seen by Russia against Ukraine since 2014, when Moscow responded to the Ukrainian revolution, that saw the overthrow the pro-Putin Ukrainian President Viktor Yanukovych. Putin response was to deploy Russian troops to the Crimea and annex it from the Ukraine despite International condemnation. The conflict intensified after Putin backed pro-Russian separatists in the Ukraine and backed them up with military forces. It believed that more than 14,000 people have been killed in this conflict and more 3,000 civilians.

Last week the West was shocked as convoys of tanks and armoured vehicles were filmed being transported on mass into regions close to the rebel-held eastern Ukraine and annexed Crimea. According to Russian military experts, what is pushing Putin’s dangerous and provocative military manoeuvres against the Ukraine is the closure of the pro-Russia TV channels in the Ukraine, the threat of arrest and trail of pro-Putin Viktor Medvedchyuk and President Biden calling Putin a murder.

The tension between the two former Cold War adversaries is intensifying as US President Biden has given the Ukrainian President Zelensky unwavering support. We could witness the deployment of NATO troops to Eastern Europe to counter the Russian threat.

In this uncertain world caused by the global pandemic Covid19 we could witness a major European war as Putin seeks to control the former Soviet States in Eastern Europe that were controlled by Russia in the Cold War.

To gain a deeper understanding of Russia’s provocative military measures in Eastern Ukraine do not forget to watch Behind the Headlines live at 9pm this Wednesday.