A Jewish Viewers perspective on Israel 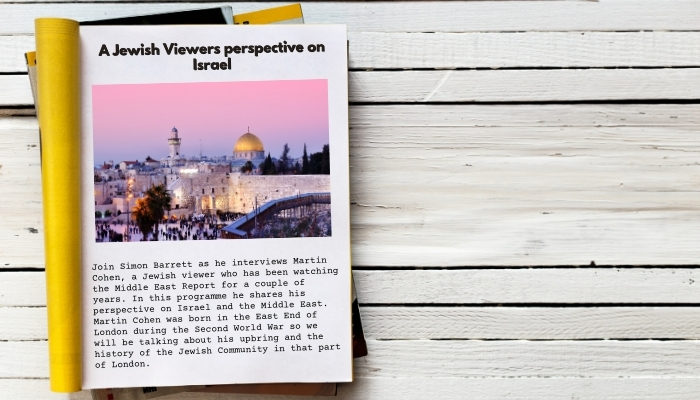 Join Simon Barrett as he interviews Martin Cohen, a Jewish viewer who has been watching the Middle East Report for a couple of years. In this programme he shares his perspective on Israel and the Middle East.

Martin Cohen was born in the East End of London during the Second World War so we will be talking about his upbring and the history of the Jewish Community in that part of London.

They will be discussing his experiences of anti-Semitism growing up as a boy and how his father was one of those brave Jewish men who stood up to the fascist leader Arthur Mosely and the Black Shirts from rioting in the Jewish area of London in 1936.

They will discuss how he made Aliyah to Israel in the Spring of 1973 only a few months before the outbreak of the Yom Kippur war when Israel when in a surprise attack on the Jewish State was carried out by Egypt and Syria. He described what it was like to be in Israel at this time and how he went on to join the Israel Defence Force.

Martin also discusses in this interview the importance of Christians befriending the Jewish people and standing with them in support and solidarity.

Don’t miss this programme, Middle East Report Friday at 9pm repeated Sunday at 3.30pm.  A unique insight not to miss.