80th Anniversary of the Sinking of SS Patria 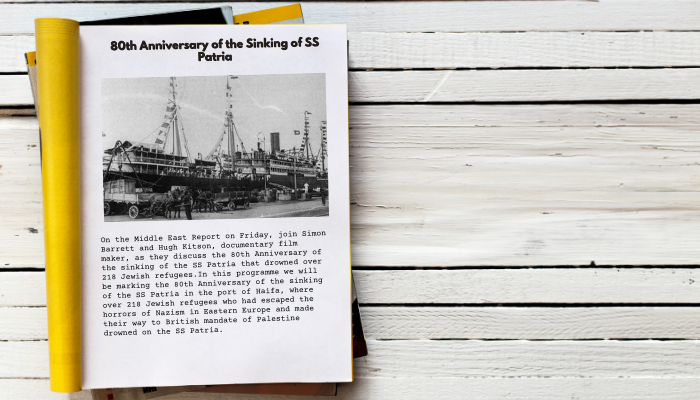 On the Middle East Report on Friday, join Simon Barrett and Hugh Kitson, documentary film maker, as they discuss the 80th Anniversary of the sinking of the SS Patria that drowned over 218 Jewish refugees.

In this programme we will be marking the 80th Anniversary of the sinking of the SS Patria in the port of Haifa, where over 218 Jewish refugees who had escaped the horrors of Nazism in Eastern Europe and made their way to British mandate of Palestine drowned on the SS Patria.

SS Patria and those Jewish lives drowned represents the betrayal and failure of the British Authorities given charge of the British Mandate by the League of Nations to prepare the Jewish people for self-determination in their ancient homeland. The SS Patria also represents the plight of over a million Jewish people who could have been saved from the horrors of the Holocaust had it not been for the White Paper of 1939 that restricted Jewish immigration to Palestine.

The SS Patria was sunk by a bomb planted by the Jewish underground movement the Hagannah, who had only hoped to disable the ship to stop the deportation of 2000 Jewish refugees to Mauritius. The bomb was too powerful and sunk the ship on November 25th, 1940.  This has become one of the forgotten Holocaust stories of the Second World War.